The Soviets left us with those concrete block buildings that we either need to collapse or give a new life to them. Tbilisi Mural Fest took the initiative when it was time for an intervention and brought together world-renowned and local professional street artists. This is how we meet Dutch artist Judith de Leeuw who not only left any passer-by fascinated by its beauty but also put her stories and personal experiences in her work.

You will find this building in Didube, at 7 Eristavi Street. The dimensions of the work are unprecedented in the region and measures up to 60 meters, which makes it possible to view even from considerably distant spots. She used photography to create a modelling base for the painting, and continued working with acrylics and spray paint.

The mural is called ‘’Hold Me Tight’’ and we figured it had a story and we needed to learn all about it from the artist herself:

This is a tribute mural to all the broken and beautiful people I have met in the past year. One by one, they showed me their vulnerability. I notice people are often ashamed of their vulnerability, while I see the beauty in it. This mural is a reminder to embrace yourself (and your fragility), even though it does not seem natural in, for instance, a depression. These people are the most admirable people that I have met in my life, including their trauma.

Thank you for being you, and showing yourself to me:

Sanne & Casper: who grew into a stronger relationship because of cancer (Padova, IT)

Hansje: Who became a musical genius during her psychosis (Sweden)

(Anonymous): Who did everything he could to help his suicidal wife and show how precious she is. (Canvas)

Alexa: Who became the most caring person in the world because of her diagnosis with MS (Coming soon)

(Anonymous): he transgender that found himself through a great struggle of acception (Rome)

As I admire all these people so incredibly much, one by one, I hope we can collectively start to be proud of our trauma as 90% of the world is affected by it. Be proud.

What are your thoughts about the street art scene in Tbilisi?

As I understood from my curator, street art is still very new in Tbilisi. I’ve seen more places around the world that just started to get used to murals and I notice some places find trouble in having fear on the public image of the streets. It takes time for the people to get used to this form of art and embrace all its different outputs. Therefore there are some countries that have great creative limitations because of the government trying to ‘control the fear’ - which isn’t good for the outcome of the art piece. In Tbilisi, on the other hand, I had complete creative freedom. This meant a lot to me and allowed me to do good work. It's impressive for a mural organisation to provide creative freedom in a country that is in ‘street art baby shoes’.

You have your signature aesthetics. What has influenced it?

I think it works the same as clothing - the way you dress reflects your soul. I used to have a black and white with turquoise signature because I have seen a lot of dramatic things in life. The characters seemed to be floating in water and a bit ‘frozen’.  Though the painting always had a positive message and outcome. The works told stories about hard experiences such as my subject accepting himself as a transgender - but the output was change. I've always been a person that thought we should embrace and express every part in life - also the hard ones.

The ‘turquoise age’ had a bit of a gloomy undertone, as I was still discovering some paths to  happiness in life. When Covid came, I realised that I wanted to help people. Once I realised that I could actually help people with my work I achieved extreme happiness and fulfilment which led to my next era - ‘the golden age’. It contains a golden halo around my subjects' faces, that indicate their beauty and admiration that I have for them. In other words, you can say that their vulnerability makes them a bit ‘holy’ to me. 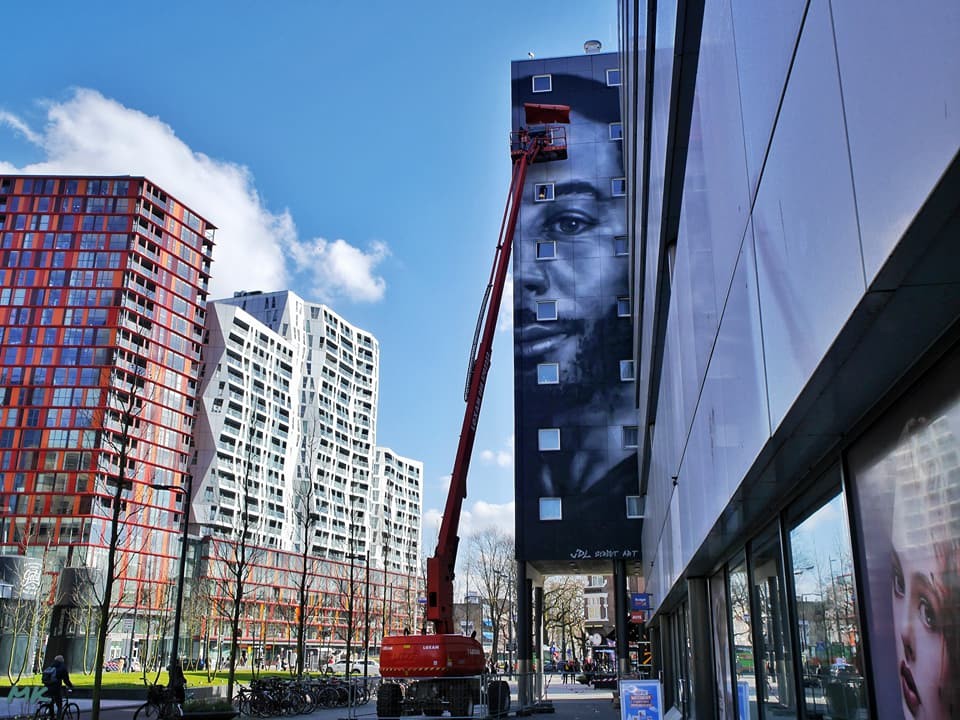 Is there a central theme that ties your work together?

I share tribute stories of admirable people that go through rough times. These stories are related to social issues such as LGBT+, Relationships during cancer, racism, MS, suicide, psychosis, child trafficking, etc.

What’s your next destination?

I hope that I will be able to go to Capetown, South Africa in February after the European street art winter break. Though I am not sure and had to cancel a lot of things because a close family member is very ill. I hope for the best and keep my fingers crossed.

Let’s hope for the best. Thank you for the interview!

You can find her works on: JDL Street Art