The Decoupling of GDP and Energy Growth

It’s long been axiomatic that economic growth and energy demand are linked. As economies grow, energy demand increases; if energy is constrained, GDP growth pulls back in turn. That’s been the case since the dawn of the Industrial Revolution, if not long before.

But past is not always prologue. Mckinsey's global energy perspective—part of a multiyear research effort examining the supply and demand of 55 types of energy across 30 sectors in some 146 countries—suggests that we’re beginning to see a decoupling between the rates of economic growth and energy demand, which in the decades ahead will become even more pronounced.

That’s not because the world will be less “energy hungry.” People will continue to use energy in their daily lives, and happily, in the decades ahead, more people will have access to more modern appliances and on-the-grid housing. Businesses will still need energy to run; economies will require it to grow. Nonetheless, new technologies and larger trends should cause the energy demand curve to flatten.

Indeed, the energy landscape as we know it is poised for foundational change between now and 2050. What does this mean for companies and their leaders? For starters, your core business model may be tested, and new opportunities—and challenges—beyond it will almost certainly arise. Moreover, determining the right path will require companies to adapt both urgently and in measured stages. Navigating the great decoupling will take resilience. Farsighted leaders should start preparing now.

Energy and industrialization: A slow burn

Energy demand has long tracked economic growth. So much so that for the past two centuries, the amounts of energy that economies need have increased virtually in lockstep with the amounts of wealth that economies create. And, to a remarkable degree, wealth creation has depended on a society’s proficiency at burning things.

In 1800, the fuel of choice was biomass, such as wood from fallen trees. Even during the latter half of the 19th century, after the United States and parts of Europe had begun to industrialize, many economies ran primarily on biomass. Biomass was highly inefficient as fuel, as almost all of its embodied energy was lost in its burning. Still, before widespread industrialization, the conversion loss was bearable; generally, there was enough wood to burn to make economies grow. The resulting wealth creation wasn’t enormous, but it was pointing up. Primary energy demand (the demand for energy in its raw form, before it has been converted to secondary energy such as electricity or district heating) pointed up as well, growing at about 1 percent per year from 1850 to 1900.

Then, at the turn of the 20th century, rates of both energy demand and economic growth took off. From 1900 to 1950—as horses gave way to cars, oil lamps to electric lighting, and ice boxes to refrigerators—primary energy demand nearly doubled. Economic growth rates soared as well; in the United States (by far the largest economy in the world), GDP per capita in 1950 was more than twice that of 1900.1 For that level of wealth creation, burning trees and other forms of biomass wouldn’t suffice.

But burning fossil fuels would suffice, and the 20th century’s embrace of petroleum (to accompany coal) sent production and consumption into overdrive. Fossil fuels lose about 40 to 70 percent of their embodied energy when converted into electrical or mechanical energy—a lot, but not when compared with the near-total loss incurred by burning wood. While larger economies need more tons of coal and barrels of petroleum to grow faster, the burning goes a longer way (Exhibit 1). 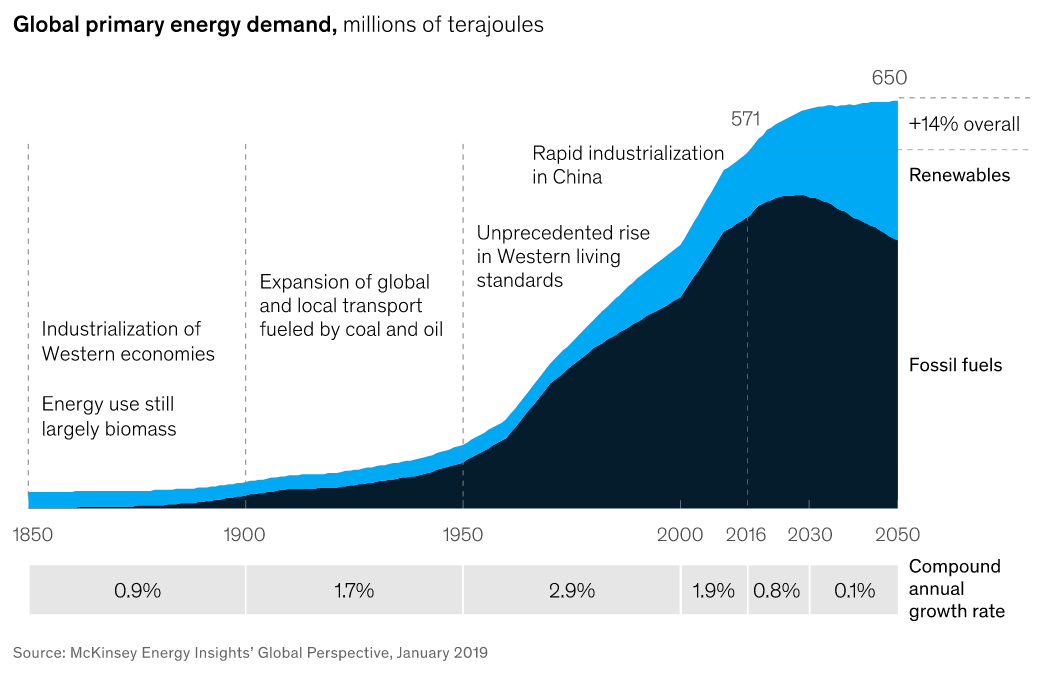 Over the second half of the 20th century, with living standards in the West and other advanced economies rising, the growth in energy demand accelerated even more. Those dynamics have continued into this century, as China has helped power global GDP to a median rise of 3.7 percent per year since 2000, with global energy demand continuing to rise as well. And 21st-century economies will continue their ascent. The world population will continue to grow, potentially reaching ten billion by midcentury; the plateauing of Chinese and Organisation for Economic Co-operation and Development (OECD) populations will be more than offset by significant increases in India, other parts of Asia, and, especially, Africa, where more than 50 percent of the world’s projected population increases will occur through 2050.