Shopping Transformed: Malls of Tbilisi in the Chain of Retail Revolution

Cushman & Wakefield Georgia reviewed some of the key ideas that drive the viability of shopping malls as well as macroeconomic and social shifts that have precipitated the demise of the traditional model.

They also assessed the position of Tbilisi shopping centers in the retail evolutionary chain and reviewed existent and potential effects of e-commerce on the predominantly brick and mortar market.

"It is our conclusion that the Tbilisi shopping centers are yet to evolve as fast and as forward as their international counterparts, however some of the concerns that plague these very counterparts may prove to be baseless in our local market".

The modern retail landscape in Tbilisi has formed only within the last two decades. PreSoviet retail consisted of small bazaars white the Soviet Tbilisi acquired four
department stores or “Univermags” located at Marjanishvili Ave (TBC Bank HQ),
Freedom Square, near the Railway Bridge and at the Rustaveli Avenue. The latter was rebranded and reopened in 2018 as one of the higher-end and popular shopping centers – Galleria.

Tbilisi retail has come a long way since the Soviet era. Presently, there are more than 20 enclosed shopping establishments in the City. Total floorspace exceeds
400,000m2 with an additional area of 67,000m2 to be added within the next three years. 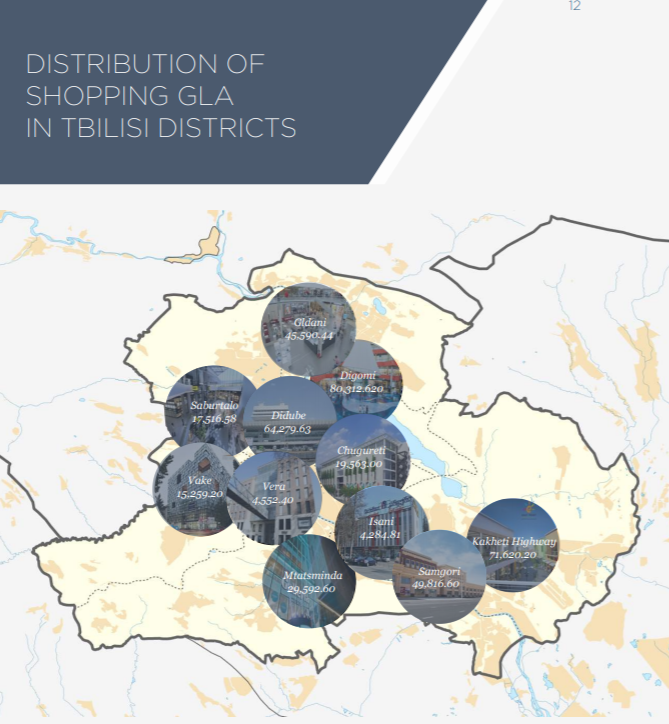 GLA distribution between the districts is somewhat uneven. Floorspace in Vera and Isani barely exceeds 4,000m2; Gldani and Samgori offer leasable area of 45K m2 and 49K m2 respectively; malls in Didube collectively offer 64,279m2 and those in Dighomi offer more than 80,000m2. Mtatsminda, Vake and Chughureti vary between 15K-30K of floorspace.

The most recent addition to the retail landscape is Galleria Tbilisi, which opened in
2018 and added 21,000m2 to the Mtatsminda retail supply.

Galleria opened in the very same location that used to house the Rustaveli Univermag. Introducing H&M to the Tbilisi market along with an extensive lineup of upper and midscale brands – Gant, Lacoste, Armani Exchange, Guess and Karl Lagerfeld – it has become both a local and a tourist retail hotspot.

Being located in the very center of the city gives it an edge over other expansive malls such as East Point and Tbilisi Mall; experiential offerings such as CAVEA Cinema, a bowling alley, Children’s corner, and the Griboedov Theater (now only accessible from Galleria) provide it with popularity amongst locals and foreigners.

Galleria was the first major mall opening in years. 2012 was a major year, when 5 small and medium-sized shopping centers opened across three districts. 2010 however remains the record year in terms of surge in floorspace – 4 shopping malls added more than 111,000m2 to the total supply.

East Point on the Kakheti highway accounted for more than 70,000m2 of the total new supply. East Point is one of four shopping malls that can be given a regional status. Another regional mall – Tbilisi Mall which opened in 2008 was the first of its kind, and a trailblazer at the time.

Do Business Like There IS Tomorrow: Why Georgian Businesses Should Partner with CSOs
04

Ambassador of Hungary: We will be One of the First to Send Tourists to Georgia
05