Georgia’s negative trade balance in January-May 2019 constituted 2 026.1 million USD, that is, 40.9% in external foreign trade turnover. In the same period, exports without re-exports rose by 4.7% to 938.6 million USD. 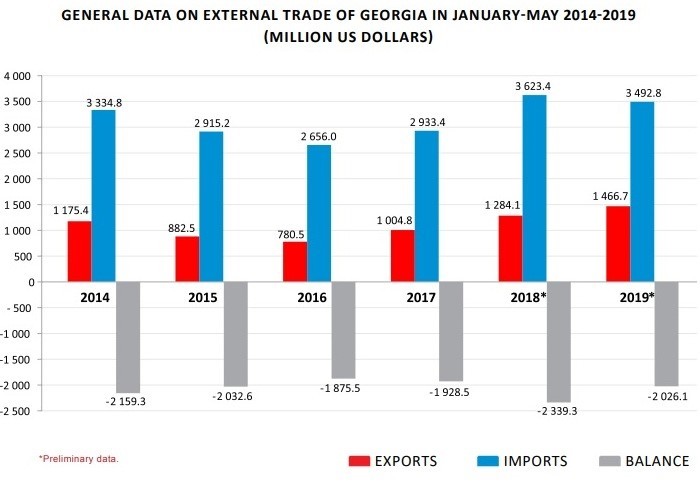 It should be noted that major exports items are copper ores and concentrates with 261 129.3 thousand USD; vehicles ranks second with 207 780.9 thousand USD; ferroalloys ranks third with 136 715.0 thousand USD, packed medications and wines rank 4th and 5th.

“Georgia’s external trade deficit is the lowest since 2005. In terms of month on month, the figure in May constituted 38.4%, while the highest deficit was recorded in December of 2007 and 2008 – 70% and 74.1% respectively”, economic expert Vakhtang Charaia said. The analogical situation is recorded in terms of January-May indicators. Namely, the indicator equaled to 40.9% in January-May 2019. The figure systematically declines over the past years. The figure exceeded 60% in 2007, 2008 and 2009, he noted.

Georgia’s foreign trade turnover has not been diversified in either exports or imports. According to the January-May indicators for exports and imports, Georgia’s top three trade partners hold 1/3 ratio in total trade, top five trade partners – over 50%.

Diversification of trade partners and trade products is of crucial importance. New export items should be developed (electric cars, solar panels and so on) and the ratio of traditional imports products should decline and they should be replaced with more machineries for production process for manufacturing imports-replacing and export-oriented goods, he added.