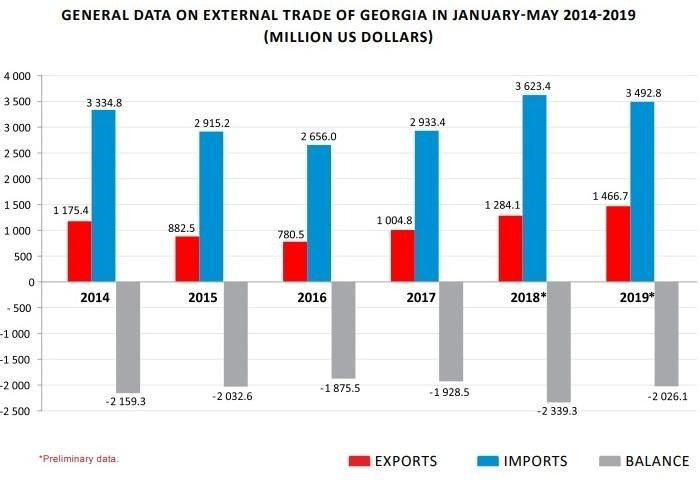 It should be noted that copper ore and concentrate rank first in Georgia’s major exports items. The export of these  products in January-May constituted 261,129,300 USD. Automobiles ranked second with 207,780.9 thousand USD exports; ferroalloys rank third with 136,715,000 GEL; and the 4th and 5th positions are occupied by prepackaged medications and organic wine. In January-May 2019, the ratio of top ten exports countries in Georgia’s total exports constituted 72.9%. The top three export markets are as follows: Russia (218.7 million USD), Azerbaijan (168.8 million USD) and Bulgaria (119.1 million USD).

Petrochemicals and packed medications share the 4th and 5th positions. In January-May 2019, the ratio of the top 10 importer countries in as a share of Georgia’s total imports made up 66.2%, including Turkey at 595.7 million USD, Russia at 349.6 million USD and China at 347.9 million USD.

According to him, the same situation is reported for January-May indicators, under which the 2019 indicator accounts for 40.9%. According to this expert, over the past years this indicator has systematically shrunk, and over the past 15 years the highest indicator was recorded~in 2007, 2008 and 2009 and the figure exceeded 60%.

According to this expert, Georgia’s foreign trade has not been diversified in either exports or imports and according to the 2019  January-May report, Georgia’s first three trade partners hold a 1/3 share, and top first five partners a share of 50% or more. It is important to diversity trade partners and trade products, create new export products (for example, electric cars, solar panels and so on), and reduce traditional imports items (for example, the ratio of oil products) and to replace them with a mechanized  production process that should reduce imports and grow exports, Vakhtang Charaia said.