Why You Should Consider Using Bitcoin for Your Business: Bitcoins as an Asset and Technology

Bitcoin is not just an asset or store of value to hedge against the rising inflation. Bitcoin is also a technology platform used by startups from all over the world.

In this article, I explain why it might make sense for your business to use Bitcoin. More and more investors, funds (https://www.stillmark.com/) and venture capitalists (https://www.bloomberg.com/news/articles/2021-06-18/venture-capital-makes-a- record-17-billion-bet-on-crypto-world) are betting on Bitcoin as an asset and on companies using Bitcoin.

It is very difficult to explain Bitcoin simply and in a nutshell. Bitcoin is a software code and therefore programmable money. Everything can be built on top of Bitcoin or with Bitcoin. Bitcoin is harder, faster, and safer than any monetary network we've ever had. Bitcoin is an electronic bearer asset and an open source monetary system. When you combine these two unique functions, you get a technology that achieve cash finality with final settlement anywhere in the world at any time (24/7/365) rated in any currency pair you want.

"Bitcoin is a technology, it is a currency and it is an international network of payment and exchange that is completely decentralized. It doesn’t rely on banks. Bitcoin represents property and freedom to eight billion people. An unknown person named Satoshi Nakamoto created a computer program that would run into distributed fashion on computers all around the Earth. And that program creates twenty one million virtual coins in cyberspace. He created a perfect digital gold on an open monitoring network. And so that means if you wanted to save a thousand dollars, have it beyond the reach of everyone else and wanted to have personal custody of it, you could have that with Bitcoin. Bitcoin is a technical solution to give eight billion people property rights.“ – Michael Saylor

Why should you use Bitcoin?

Bitcoin is the fastest growing technology and at the same time the fastest growing asset in the world. Bitcoin is growing faster than the Internet and it took Bitcoin only 12 years to reach a market capitalization of $1 trillion (Google and Amazon took about twice as long). "In only 12 years, Levin estimates that BTC reached 135 million users today with projections to have 1 billion users by 2025. In the chart below, it’s possible to distinguish that when the Internet was at the same point in its adoption curve, it took 7.5 years to reach 1 billion users. BTC will do the same in almost half the time.“ - Reynaldo Marquez (https://bitcoinist.com/how-bitcoin-adoption-rate-is-beating-the-internet/)

“A new study estimates that about 46 million Americans now own at least a share of Bitcoin — or about 17% of the adult population. What’s more, a high percentage of those people are open to adding cryptocurrency to their personal financial plans. New York Digital Investment Group conducted the study, and they found that about 75% of the respondents said they wanted to learn more about Bitcoin annuities and Bitcoin life insurance. Nearly 90% said they had some interest in insurance or annuity products that have at least some indirect link to Bitcoin.” — Nasdaq (https://www.nasdaq.com/articles/about-46-million-americans-now-own-bitcoin-2021-05-14)

So that’s about a 20% penetration rate over 12 years in the USA. Bitcoin is growing in America about as fast as the Internet and cell phones. 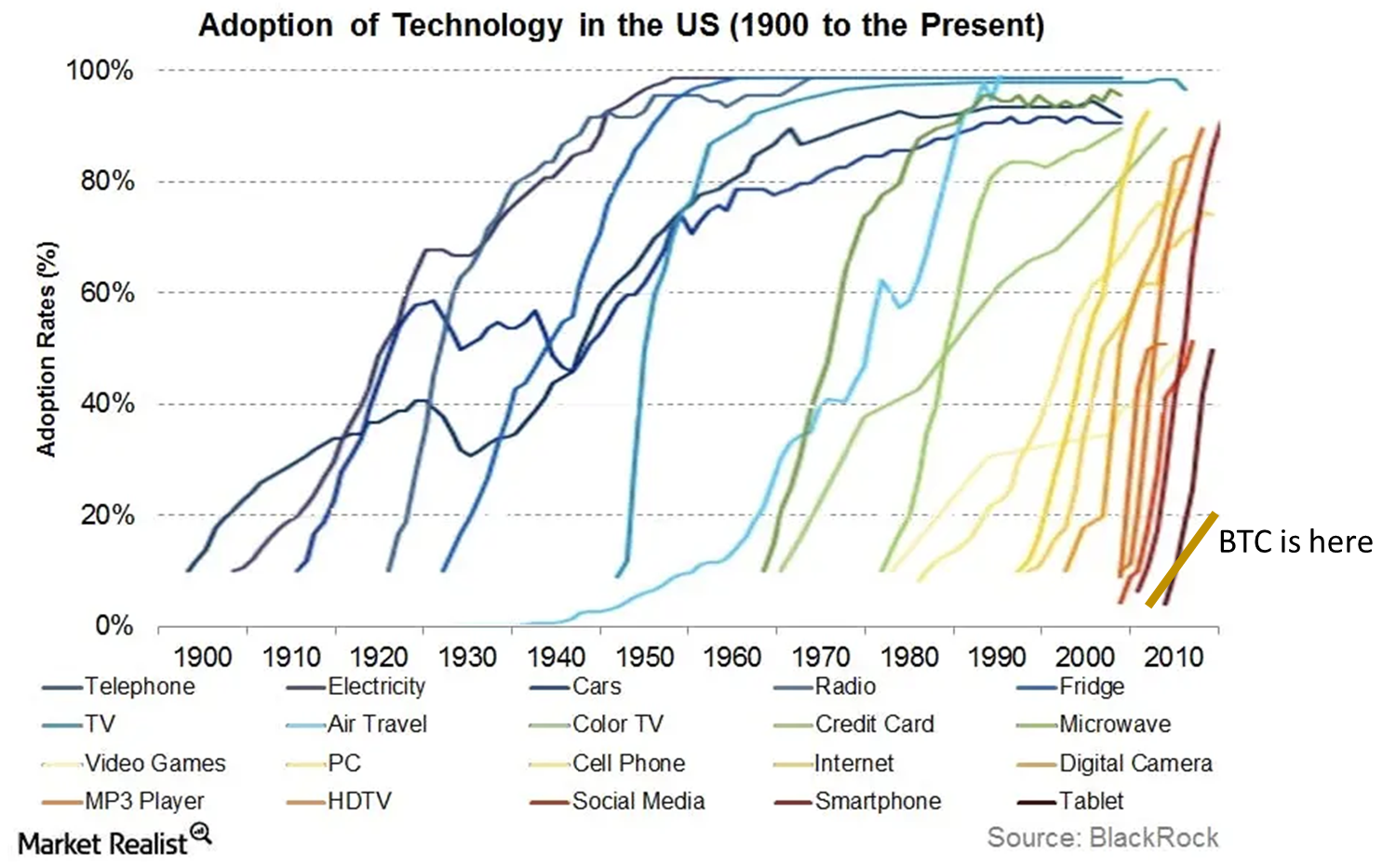 Consequently, it should definitely make sense to keep an eye on a technology that is growing very fast and solving a unique problem (store of value): There is inflation at record levels due to central bank policies. "Annual inflation at 9.9% in June in Georgia, breaking 10 year record high." - https://www.nbg.gov.ge/index.php?m=304

How can you use Bitcoin?

1.Bitcoin treasury strategy (https://www.microstrategy.com/en/bitcoin/videos/bitcoin-corporate-strategy): Bitcoin is a secure alternative to cash. Since Bitcoin is a global currency, you can store it independently anywhere and send or transport it as you wish. You don't need a bank. You could save a certain percentage of your cash flow in bitcoin every month. Bitcoin is the best performing asset of the decade with on average approx. 230.6% return per year. “The road to serfdom is working harder to earn a fiat currency growing weaker.” – Michael Saylor

2.Bitcoin product and service strategy: You can build Bitcoin into everything (financial or technical) you want. Bitcoin is interesting for anyone working in the technology or financial sector. You can also offer Bitcoin as a payment option. You could market that and attract early adaptors (new customers or talent). For example, here are two websites where you can register as a merchant who accepts Bitcoin (Lightning): https://lightningnetworkstores.com/ & https://acceptlightning.com/list.html. Maybe you can also build an open product that is powered by Bitcoin. You could drive revenue by building bitcoin software and hardware tools. Of course, you could also offer bitcoin services for other companies or the consumer.

I.Victoria Kayak Tours & Rentals Ltd. from Canada has offered Bitcoin as a payment method to their customers. They give the customer a large discount for payment in bitcoin. “Recouping that discount is easy because all we have to do is hodl for maybe a year or two. So this endearing, local, small business is going to earn themselves an annual ROI of maybe 20% or more after giving their customers a 60% discount.” - Victoria Kayak

II.Circle K a convenience store uses Bitcoin ATMs to attract more customers. “By adding Bitcoin ATMs to the company's stores, Circle K can attract new customers to their stores, offer financial access to underserved communities, and set themselves apart from other retailers with this new technology." - Brandon Mintz

Use Bitcoin and the second layer technology named Lightning Network to develop a new business model.

What are the benefits for using Bitcoin (https://bitcoin.org/en/bitcoin-for-businesses)

Low fees: “Fees are unrelated to the amount transferred, so it's possible to send 100,000 bitcoins for the same fee it costs to send 1 bitcoin.” From microtransactions up to millions of dollars - you can send anything almost for free with the Lightning network or you use the Bitcoin blockchain as a secure settelement layer.

No Chargebacks: “Any business that accepts credit cards or PayPal knows the problem of payments that are later reversed. Chargeback frauds result in limited market reach and increased prices, which in turn penalizes customers. Bitcoin payments are irreversible and secure, meaning that the cost of fraud is no longer pushed onto the shoulders of the merchants.“

Fast international payments: “There are no banks to make you wait three business days, no extra fees for making an international transfer, and no special limitations on the minimum or maximum amount you can send.”

No PCI compliance required: “Accepting credit cards online typically requires extensive security checks in order to comply with the PCI standard. Bitcoin still requires you to secure your wallet and your payment requests, however, you do not carry the costs and responsibilities that come with processing sensitive information from your customers like with credit card numbers.”

Great Marketing: “Bitcoin is an emerging market of new customers who are searching for ways to spend their bitcoins. Accepting them is a good way to get new customers and give your business some new visibility. Accepting a new payment method has often shown to be a clever practice for online businesses.”

Multi-signature: “Bitcoin also includes a multi-signature feature which allows bitcoins to be spent only if a subset of a group of people authorize the transaction. This can be used by a board of directors, for example, to prevent members from making expenditures without enough consent from other members, as well as to track which members permitted particular transactions.”

Accounting transparency: “Many organizations are required to produce accounting documents about their activity. Using Bitcoin allows you to offer the highest level of transparency since you can provide information to verify balances and transactions through the block chain. For example, non-profit organizations can allow the public to see how much they receive in donations.”

Let me tell you more about using Bitcoin as a payment method. In the traditional credit card payment system, merchants have to pay a fee not only to the bank but also to the credit card provider. There are usually three types of fees: the interchange fees, assessment fees, and processing fees. These fees go to the card's issuing bank, the card's payment network, and the payment processor.

Not only do you have to pay fees per transaction, but you also have to get the necessary card readers and deal with the technology and regulations. “Basic mobile readers are available for $20 to $50, although some payment processors (Square included) offer one for free. Terminals and registers are more expensive, as a standard terminal can cost $150 and an advanced register can cost $1,000.” – Lyle Daly

Using credit cards as a merchant is not only expensive but also involves other risks. After a customer successfully disputes an item on their account statement or transactions report the charge on the credit card is refunded to the payment card of the customer. This is possible on credit and debit cards. 76 (https://midigator.com/chargeback-report-statistics/#chargeback-to-transaction-ratio-decreased) of these chargebacks are fraud by the customer. For every 100 transactions, approximately two transactions are affected by a chargeback. “Also notable is that 86% of all chargebacks are probable cases of friendly fraud, and merchants lose $ 2.40 for every dollar of chargeback fraud. In total, fraud costs the average merchant 1.47% of their total revenue. ” - Mickael Gibrael

Bitcoin fixes both problems. Not only are no chargebacks possible, transactions can be made over the Lightning network for free. With Bitcoin´s Lightning network you can receive and send money worldwide for free. The transaction is settled in real time and therefore no chargebacks are possible. Usually, it is enough to simply print a QR code or add it to the website. You can read more about the Lightning network, which is built on the Bitcoin protocol, here: https://medium.com/@Max_BTC/bitcoin-the-most-innovative-technology-the-multilayer-approach-of-bitcoin-15269b65c9c3

These are the features of Bitcoin that no other altcoin project has:

*Fixed supply that is not dependent on demand: It´s super sailable across time and space. The scarcity of 21 million Bitcoin is not a problem for making payments. 1 Bitcoin is exactly equal to 100,000,000 Satoshi. One Satoshi is 0.00000001 BTC. The conversion factor is 100 million in each case.

*Monetary policy enforced by a distributed network: So that the network is the most secure network in the world. The Bitcoin blockchain is relatively small. Anyone can create a node for the blockchain for about 200$ and thereby secure the network. On https://bitnodes.io/ you can find about 10,000 nodes currently running on the Bitcoin network. They are globally distributed. In comparison, the Internet has 340 commercial nodes.

*Predictable issuance: You can determine exactly how many Bitcoins there are and how many Bitcoins will be created. Currently there is an inflation of Bitcoin of 1.73%, which is moving towards 0% over time. The current stock-to-flow ratio of Bitcoin is 57, making Bitcoin one of the hardest asset in the world.

*Open, global, permissionless: It works the same everywhere and Bitcoin is for everybody. Bitcoin has no CEO or company. To use Bitcoin, you only need a smartphone and internet.

*Technological progress: You can immediately get to the same level of technological development and financial infrastructure like everyone else. Bitcoin can never be duplicated again. Bitcoin has the largest market capitalization, high liquidity/volume, best known brand, network effects, many investments and much more.

My name is Max Mittelstaedt and I am a Business Psychologist from Germany. When I was looking for a new challenge, I came across Bitcoin. I was immediately fascinated and fell right into the “rabbit hole.” I am convinced that Bitcoin will bring us a better world and can help individuals, businesses and governments.

For updates on Georgia and my attempt to make Bitcoin more popular here, follow me on Twitter.

I also wrote a 40-page report on how the country of Georgia could benefit from Bitcoin: https://bitcoin21.info/#BTC