A somber tone was thick in the air at the usually jovial Fabrika courtyard. The conversations would ebb and flow between a feeling of agitation and solidarity. There was a natural need to talk about what had happened earlier. However, everyone was already too drained from the experience to carry on. The worst part was the overall lack of surprise.

At around 1:00 PM, A local television journalist was attacked by a mob led by militant religious leaders in Tbilisi. This attack was the first sign of serious violence as Georgia's Pride celebration started on July 5th.

I had been hoping to meet up with some friends around 6:00, who had planned on joining the event. I had never been to a Pride event here before, but on my ride to the center of the city, it was starting to become clear that I wouldn't this year either.

Traffic was backed up, and I did my best to maneuver the motorcycle between the deadlocked cars. Eventually, I navigated to the front of the lines of vehicles, only to find hundreds of police and protestors disjointedly clogging up the street. Something had happened, but I was still hoping this may only be a small problem.

Immediately upon arriving at my destination, I got my phone out to check with my friend.

"When are you going to Pride?" I asked.

"They canceled it. Already too many people injured."

That's when I learned that the Pride office had been ransacked and many other NGO offices that supported LGBT rights. In addition, a journalist from Poland had been stabbed right in front of my friend's apartment building. The opposition claimed it was because he had an earring.

In total, 55 people were injured before the main Pride event had been scheduled to take place. What made this more disturbing was the fact that 53 out of the 55 people were journalists. These weren't random fights at a protest resulting in injury; these were calculated attacks.

The rest of the time I spent at Fabrika, I watched as people who had planned to be at the event stood with signs and took photos to post online.

It was probably the first time I had ever witnessed people taking Instagram photos and legitimately thought, "how brave."

One of the members begged everyone in the pictures to hold off on posting until after the entire group had left.

"They [The nationalist protestors] will know where we are and can easily find us here."

There was a debate on whether or not the group should throw away the cardboard signs and posters now, rather than risking being found in the streets with them later on the walk home.

"We were already lucky enough that no one died." 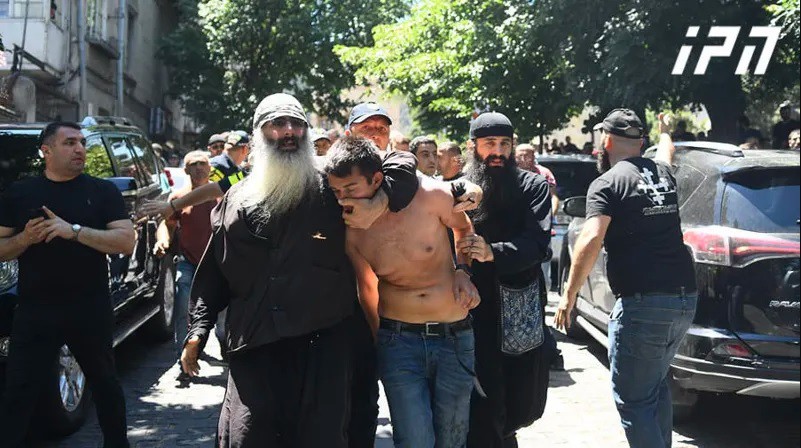 I drove to the old hostel, where I first came several years ago. I met my friend Saba and his family there. It was a relief to be in a safe place to talk further about the day's events. It hit me strange that I had to admit that even I, who was at nearly zero risk of violence, had felt uncomfortable. So many people would be returning home to households that are not safe for them to be. There is no "comfortable" for them.

Spirits remained low. It felt as though we were indeed outnumbered. In the weeks before, countless posts were made by the hate groups, referring to themselves as the 95%. An incredible number to assume, but if you say anything enough, people start to believe it.

It should come as no surprise that a nation ravaged so severely by the pandemic would leave so many people devastated. There is little reason for many people to be excited about the future. It isn't bright. It isn't the dawning of a new era for a mighty nation. Yet, holding to the idea of some traditional values may be one of the only things that give many people something to make their life feel valuable. We all need something greater than ourselves to put our energy towards. It provides us with the strength to face the day. This need for purpose is why ideals like racism and bigotry are so seductive to those without a promising future.

I don't want this in any way to be construed as an excuse for the actions of violence today, but rather a thought on how we could approach this situation where love can prevail. Yes, as simple as it sounds, I do believe that love always wins in the end. It's this thought that gives me and so many others around the world their purpose and the strength to get up in the morning. Unfortunately, the precise delineations between good and evil are hard to see on the more minor levels of daily life, but I can offer this thought. Any thing or idea that intentionally separates us as humans is inherently wrong: any opinion, advertisement, or propaganda. Any view that celebrates the concept of division amongst people is the point where evil begins.

With that in mind, where does evil end? The best example may have come the following day.

It was hot outside, the kind of hot where you can barely breathe; not the usual dry heat that this city is known for, but a muggy miserable hot. I spent the day in a new communal workspace, catching up on some projects.

Saba texted me and asked if I had planned to go to the protest later that day. It was a definite yes from me. My spirits lifted slightly at the thought that action would be taken immediately following the events of the day prior. As we were winding things down in the office, a coworker and friend told me I better get a move on as it started to rain slightly. I was on the bike, and it would probably get worse soon, so I gathered my things and took my leave. By the time I got down to the street, it had already become a torrential downpour. The road was flooded with water. Fat raindrops plunged into the puddles, as did my hopes when I imagined the damage it would do to the morale of the protest. I feared that this would be taken as a sign from God against the LGBT community.

I stood under an awning and pondered ordering a cab until I noticed the sky was rapidly getting brighter to the west. So I ran out to find a clear view of the sky in the opposite direction.

Sure enough, to my absolute delight, there was a beautiful double rainbow cutting through the sky over the city.

By the time we got to the steps in front of Parliament, a massive crowd had already formed and was growing rapidly. Hundreds of police surrounded the thousands of people on the street. There were no speakers planed; it was only a gathering of people with a cause. Men stood outside the crowd holding signs with anti LGBT statements on them. Their presence was enough to make one nervous, as they threw eggs and lit off fireworks, but the fear was no longer there. These people weren't 95% of the population. This was a small, sad pack of animals.

How do you defeat evil? You come together, and you outnumber it.