Silk Road Group and Tsinandali Festival Hosted media and other guests in a new hotel, nearby Tsinandaly Estate

George Ramishvili: “An educational center has been founded within the frame of Tsinandali Festival”.

On September 5th reception was held in Tsinandali, in a newly opened hotel to announce several important topics related to the festival. The event was attended by deputy Minister of Sport and Culture, Levan Kharatishvili, governor of Kakheti region, Irakli Kadagishvili, general director of Tsinandali Festival, David Sakvarelidze, assistant to music director of the festival, Claudio Vandelly and heads of Silk Road Group Real Estate and Hospitality, George Marr and Jordi Kuijt. They spoke of the importance of the Tsinandali Festival, its educational part and the new hotel, specially built for the festival. 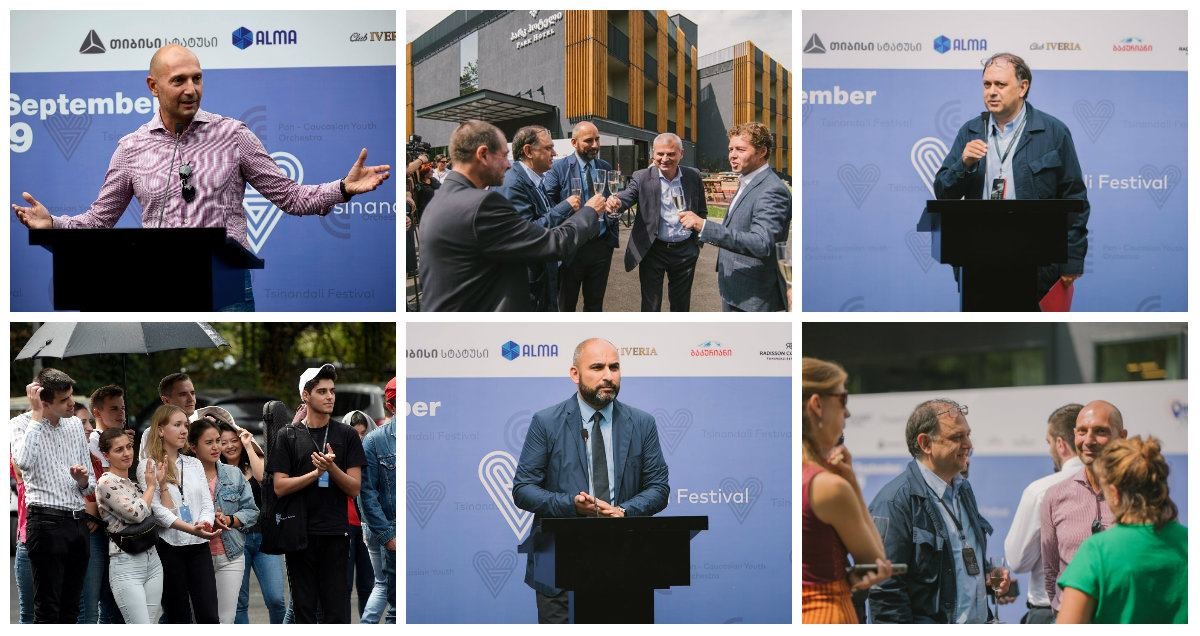 The Tsinandali Classical Music International Festival will be held in Tsinandali historical estate on September 8-22. Festival will host world preannounced stars. The musical director of the festival is maestro Gianandrea Noseda, today’s one of the most famous and prominent conductors. In the frame of the festival musical academy will be founded, which will host young musicians every year.

Also within the Tsinandali festival PAN-Caucasian youth orchestra (PAN CAUCASIAN YOUTH ORCHESTRA, PCYO) will be created. Talented young artists were selected during auditions led in 6 countries. The orchestra will be granted the status of main orchestra of Tsinandali Festival. It has been several days that the youth orchestra is in Tsinandali estate conducting rehearsals, which take place in a new hotel, called Park Hotel, created for the youth orchestra. The hotel has 70 rooms. The rooms located on the ground floor are meant for musical academy and they are equipped with musical instruments.

After the festival is finished, the hotel will be welcoming any guest weather for leasure or for organizing different events.  “Park Hotel” will be a relatively low budget hotel, compared to the premium class hotel “Radisson Collection Tsinandali”, opened in Autumn.  “Silk Road Group” invested around 4 million dollars in construction of this new hotel. The hotel design belongs to a Georgian designer, Tako Valishvili. There are over 40 persons employed in the hotel and the majority of them are local population. The group also intends to continue building this type of relatively low budget hotels in different parts of Georgia.

Founder of Silk Road Group and founder of Tsinandali Festival, George Ramishvili spoke about the importance of this place in front of the journalists and other invited guests during the presentation of the hotel, the orchestra and the upcoming festival: “Park Hotel” was built specially for young musicians. The very first guests are members of Pan Caucasian Youth Music Orchestra, who had been selected for this festival by the international jury during auditions held in 6 countries.  The first floor of the hotel is dedicated to rehearsal rooms, fully equipped with musical instruments. Actually this is an educational institution, which was initially planned, as one of the integral parts of the festival concept.  Thus, educational side is very important part for the festival. There are rehearsals and master classes already ongoing for the young performers in the rehearsal area of the hotel”.

During 15 days up to 40 orchestra, chamber and solo concerts will be held in amphitheater, accommodating 1200 persons and in chamber music hall, accommodating 600 persons, which was built especially for the event.

The founders of the festival are: Martin Engstroem, Founder of Verbier Festival, Avi Shoshan, Secretary General of Israel Philharmonic orchestra and Giorgi Ramishvili, Founder of Silk Road Group. The General Director of the festival is Davit Sakvarelidze.

The International Classical Music Festival will be held in September every year. Tsinandali festival was founded with the joint efforts of government of Georgia and Silk Road Group.

The main sponsor and presenter of Tsinandali Festival is Silknet, one of Georgia’s biggest telco operator and part of Silk Road Group.