Maka Batiashvili: I Try to Show not Just a Particular Figure I am Drawing, but My Attitude Towards that Figure

Maka Batiashili is a Georgian artist who works in painting, book illustration, and video art. Her inspiration comes from the moments of mundane reality that frequently turn into important visual images. The artist grasps moments from ordinary situations, which find participants on the verge, where keeping a balance is required. The key concept for Maka is a person surrounded by an emotional environment and things that constantly balances the situation, and never cross the lines. CBW had an interview with Maka Batiashvili:

Your exhibition "Moment of Narcissism" has recently opened. Where did the idea for the title come from?

Narcissism is a slowed down or rigid moment when we focus on ourselves, observe our sights or our senses, and at the same time, get very close to our identity, and start controlling it. At this time, everything is distorted, and there is only "me," and nothing else around it. This is one of the pleasures that our brains and bodies constantly seek. These works have been created with this idea underpinning it, which was displayed at the Project Art Beat Gallery. What was the work process like, and how did you decide to put it together, or when the time for the exhibition was?

I worked until I had something to say; it's easy to just feel like it’s good enough, completed. At the time, I was completely engrossed in this, and not just during the process of drawing, but also in different situations, observing people, how they behaved, how they looked, how they posed for a photo, and so on. The mind fixes the image, and then some part is realized, from the thoughtful state to the material level. At this point, this topic is over for me, and I chose a new theme to work on after a month-long interval, it’s a good feeling for a fresh start.

The process of working, in general, depends on different attributes. It is like being a child, who constantly needs to be amazed and impressed. At this time, I don't think I am trying anything special, I just prefer to convey everything as simply as possible. I try to show not just a particular figure I am drawing, but my attitude towards that figure.

What makes you the most comfortable at this time?

Everything, good lighting, tranquility, a deliberate pace, sounds coming from the street, the sound of the wind, dogs barking, neighbors shouting, kids shouting in the yard. But by no means music, this time it holds my power because the focus is on it.

I chose to go to the Academy of Arts, without any fuss. I told my family about my decision, and he immediately received my support. We chose a teacher and started to work with him as a student. My painting teacher was Bezhan Shvelidze, who had 20 students like me. It was a workshop near Nutsubidze Street, now called Pablo Picasso Street. Along the way, I realized that this is how I want to spend my entire life. There were no special restrictions here, there was a sense of freedom and a desire to become an extraordinary artist. Here, I could see so many students painting the same exact still life, yet these paintings would have come out entirely different from one another.

My teacher didn't give me a lot of notes, telling me: ‘’you know the most important thing - how to enjoy drawing, and there’s nothing more important... go on and have fun, darling! I’m always observing you, and you seem to be ecstatic; loving what you do, is the case, can’t be taught by a teacher, although one can create an atmosphere, where a student will study for pleasure, rather than obligation. 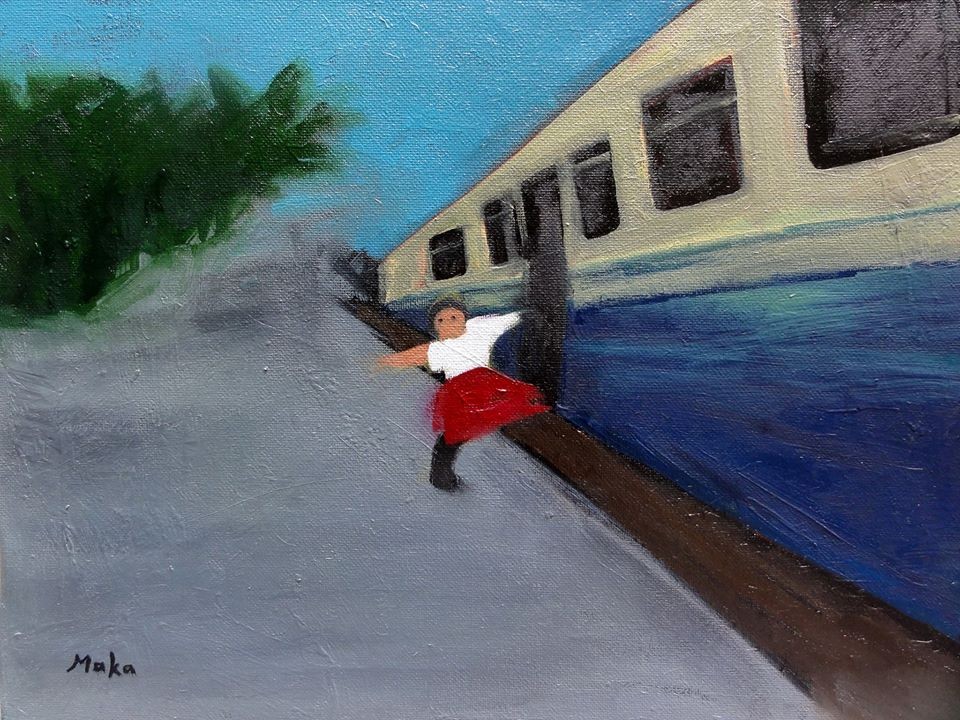 I was enrolled in the Academy of Arts in 1992, and it is easy to imagine what the situation there was like at the time. There was chaos in every sense, the first shock was that some of my students were not too keen on drawing. And whoever enjoyed it, would look crazy. It's still unclear to me why they chose this university. For a painting I dedicated my entire life to, the teacher didn't show up to the lecture for an entire year, and many other frustrating stories, but it was still so mysterious and appealing. I remember I arrived there hanging on a trolleybus, only to get there somehow…..because it was a meeting place, a strange and unexpected world that allowed for freedom.

Have you met any famous artist that affected your work?

I participated in a group exhibition recently where one of Natela Iankoshvili's paintings was presented. When I stopped by her drawing, fragments of memories would come out. I was 14 years old when I met her at her at the workshop, perhaps a relative of mine had invited me as a guest. Natela and her husband hosted us. For the first time there, I came across huge, distinct drawings in the artist's workplace. I remember how attentive they were to me, to treat me as an adult, and not as a child, they talked to me, showed me around and explained each painting. At some point, Natela and I were left alone, and she said to me: I haven't seen your paintings, but you have such a deep look your eyes, I believe you can be a good artist. Remember, the most important thing is to have your own distinctive style, for people to recognize it’s you. I tried it, and I think it worked. This is the power of words. As for the visual impact, I think all the artists I’ve ever seen contributed, even a bit. What role do you think your artworks have, or will have in the future?

I'm bringing colors and lines to this, superficially speaking. I'm just looking for something, constantly. In today' s technological era, we have a continuous stream of information that causes information intoxication, from time to time. The righteous and fictional are intertwined, at such times, and I have a desire to find something very simple and frivolous in the world of these skyscrapers. What role it may play in the future will be decided by time, and by the people.

A sense of success helps people to keep going in all professions. It is an extraordinary feeling of power and motivation, but I felt successful when I stopped caring about it, and as boring as it may sound, I just go with the flow, I draw in this flow, and everything else comes on its own, with no pressure…

In what profession would you imagine yourself, if you weren’t an artist?

I would be an ecologist, I’m very interested in this field. I love and it hurts. It hurts because most of this world consists of air, and we don't have it in our city. Breathing is a symbol of life and it lacks that aspect here, it brings a sense of helplessness, and I have no power to abandon my socially active life and escape from the centre of the city to live in the village.

Project ArtBeat appeared in the art arena just a few years ago, and it’s always in the spotlight. What is it like collaborating with a contemporary art gallery?

I already knew Natia Bukia when it opened, she bought some of my artwork, then I met Salome Vakhania, and was told about their idea; then, many galleries opened up, but it was a bold move on their part. Because it is a complex and financially unsustainable business. I liked this decision a lot, it was very bold, and thoughtlessly joined them. During these 4 years, they’ve implemented many important projects, and Georgian art has been brought to numerous important art markets, worldwide.

Can you share what the subject of your upcoming series is?

It's a fog driven by two contrasting, masses of warm and cold air, the most mysterious grey quilt in atmospheric events.

Sophio Makatsaria: "PR Field is Never Separated, It is Always in a Polyphony of Different Projects "
01

Anna Zaalishvili: Technical Acquisitions Need to Be Targeted at the Future
04